What my sleeve taught me about my habits 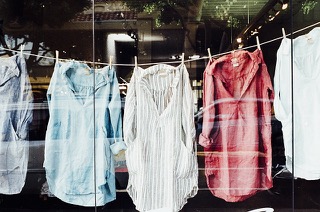 “Have nothing in your house that you do not know to be useful, or believe to be beautiful.”

I have a plain black jersey-knit sweater that I’ve worn so much, and thrown in the wash so many times that it really should be in tatters. It’s not. At this point, it’s not perfect, but absolutely still good enough to wear in public. If you’ve taken lessons from me in the past few years, you’ve seen it. It’s so go-anywhere-go-with-anything useful, that a chilly workshop participant once offered me $50 for it. I declined (though I let her wear it for the day), because it had been the last one in the store, and was already a favorite.

When the hem of the left sleeve started to unravel earlier this year, I just ignored it, thinking the whole sweater would soon follow. I continued to wear it, rolling up the part of the sleeve that was coming undone. Eventually, since the rest of it seemed to be holding together, I got the sleeve fixed.

A few days after the repair, when I put it on, I had a moment of irritation-turned-to-surprise-relief-and-joy when my hand emerged from the intact sleeve. I hadn’t noticed how accustomed I’d become to the fraying edge, and how accustomed I’d become to ignoring that it bothered me. That only became clear after it had been fixed and I noticed the contrast between my expectation and the reality. Though the problem was gone, the feeling of the problem was still very real. Feeling had become believing.

Navigating daily life calls for compromise and making-do; valuable skills that, when taken to the extreme (ignoring problems), can lead to a chronic shutting down of attention. Long-term, things and situations can wear on us, mentally, emotionally and physically, whether we can articulate the source of the discomfort or not. Maybe this is partly what is behind the William Morris quote; beauty as an invitation to stay attentive.

Over a century ago, FM Alexander discovered that he had been unable to feel the tightening and mal-coordination that was hurting his voice. At some point when he was younger, harmful effort must have begun to feel normal. He had to take this fact into account when he worked out a way to solve his vocal problem; that what he felt was happening didn’t match what he saw in the mirror. His careful observation and experimentation led him on the path to his life’s work; to awaken us to the inherent beauty in our design.